Why you should be doing more stormwater monitoring than your permit requires!

What are you testing for in your stormwater sample?

This time of year my staff and I spend a lot of time on the road visiting facilities, conducting inspections, and helping clients tackle some of the issues they uncover during the rush of business in the summertime.

It never fails though, by this time of year, that most people we visit with think they're in compliance since they're testing what their NPDES stormwater permit requires. But is that enough? Could it be that testing just for what your permit requires isn't enough and that by doing so, you're leaving yourself vulnerable to things like 3rd party lawsuits, or perhaps even a violation from your government agency?

We find that most stormwater permit holders aren't aware that they might need to test more than their permit requires, the reasons why, and the possible ramifications of not doing it.

So let’s talk about this situation, what causes it, and some ways how you can eliminate this simple problem and improve your compliance level. 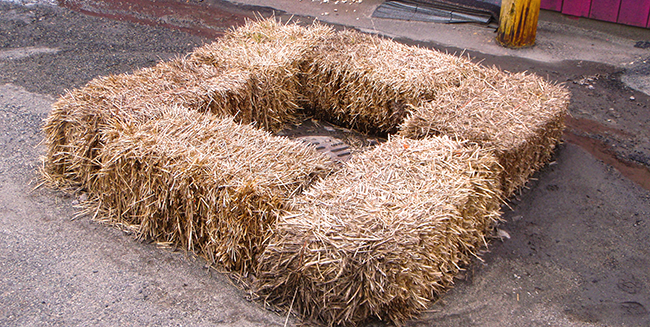 What you should be testing for in stormwater samples.

Your NPDES stormwater discharge permit very likely has stormwater monitoring requirements, including how often to sample and what parameters to sample for. But does complying with your permit mean you are safe and covered against liability?

A normal permit requires you to sample for a couple of standard chemical parameters commonly found in stormwater runoff, such as the pH level, total suspended solids (TSS), petroleum hydrocarbons, etc.

Not entirely. Just like a shady car ad, there’s some fine print in your permit which is often very, very confusing. One thing that folks may miss is that some permits require you to test for hazardous & toxic chemicals and materials at your facility which may be exposed to the elements.

We usually get a pretty standard pushback from most folks along the lines of “no we don’t have any hazardous & toxic chemicals and materials here” which is BS.

What if you already know there are other things at your facility that could be hazardous or toxic?

For example, are you doing Tier II / Community-Right-to-Know Reporting of the presence of hazardous materials at your facility, or are you doing Toxic Release Inventory Reporting for the presence of toxic chemicals? Chances are pretty good you are. So you really can't say that you don't have any hazardous or toxic chemicals or materials present. You're reporting them, you know about them.

I'll give you an example. Suppose you have equipment or vehicles which are fueled on site, meaning you're dealing with petroleum. If you’re dealing with petroleum, then there’s a chance some could spill on the ground. If it spills on the ground, it could get rained on. If it could get rained on, it could be released through a stormwater outfall, meaning your stormwater testing could be picking up petroleum hydrocarbons.

In this instance, are you testing for the potential presence of petroleum (such as by testing for total petroleum hydrocarbons) in your stormwater runoff? Even though your permit may not explicitly state that you have to test for petroleum in your stormwater runoff, you could be found liable for not testing either through your permit itself or via 3rd party lawsuits. And, that could be bad.

And suppose you're doing TRI Reporting, meaning you're already letting government agencies (and the public) know about the presence of toxic chemicals at your site. Suppose you're reporting a toxic chemical such as mercury (Hg), or any of the other 600+ listed toxic chemicals - could it be possible that it's being discharged in your stormwater? Do you know? Are you testing for it? Probably not, and that could potentially mean liability.

So how do I know what I should be testing for in stormwater?

So what does this really mean?

I’m not providing legal advice here, but let me try and explain.

There’s this idea that your NPDES permit provides you with a defense against the liability of being accused of discharging things above and beyond what is required to be tested for by your permit. We call this idea "permit shield". Do what your permit requires and you'd be not only in compliance but also safe from things like lawsuits. I mean after all your stormwater permit was written by the experts, wasn't it?

A recent court decision has identified that the permit shield doesn't really work like that.

So yes, you can be held liable for things above and beyond what your permit requires if you're discharging them.

Let that sink in.

How many chemicals might you be using? Are you supposed to test for them all?

I'm pleading the fifth on this one, unless we're working together. You really ought to discuss this with qualified, competent legal counsel.

Let's put it this way. If you're reporting the presence of hazardous or toxic chemicals in use on your site, then you might wish to consider testing for their presence in your stormwater discharges.

Reporting mercury (Hg) on your TRI reports, but not required to test for it in your stormwater discharge by your stormwater permit? You might wish to sample for it next time, and see if it's present. If not, then at least you can make the argument you looked and you found it wasn't present.

Or, you could test for it each time you sample.

Or, like most others, you can ignore this at your own peril and hope no one serves you with a lawsuit or other form of legal nastiness.

Can I get in trouble for not testing for things my permit doesn't ask for?

So that's kind of a line in the sand it seems like.

You might want to review your application's list of potential stormwater pollutants, and maybe, just maybe consider testing for the handful that could potentially be in your stormwater discharge.

Do it at least once, if nothing else to prove that you aren't discharging those chemicals.

You might also include anything else you're reporting or might otherwise suspect could be present in stormwater that you discharge.

This is harsh stuff, and probably pretty unpopular.

But, testing for what you might be discharging, above and beyond what your permit requires might be the only way to really have a shield to hide behind.

One last point. What if you test for things above and beyond what your permit requires, and you find you are discharging it? Again, seek qualified legal advice, but likely it'll turn our you'll need to notify your NPDES permit agency and have your stormwater permit modified, and you'll be monitoring for this parameter from now on. Not what you want to hear, but you’ll be better off than getting fined or sued by a third party.

So for once, being in compliance with your permit may not be enough.

If you’re wondering where you stand with regards to your stormwater sampling and testing and your permit and need some environmental guidance, click here to contact us or give us a call at 609-693-8301 and let’s get you squared away.